“Where’s the rest of your house?”

My neighbor Wendy’s first grade daughter had a friend over for a playdate in their home, which is a three bedroom, two bath adorable ranch, and the friend said to Wendy’s daughter, “Where is the rest of your house?” 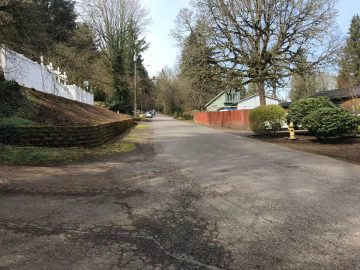 We were actually pretty proud of that little bedroom after we had remodeled our house from a three bedroom split level home to a five-bedroom daylight ranch. But, yes live in a modest neighborhood and people are pretty down to earth.

It’s all about perspective. Our refugee friends from Sudan, who used to squeeze their family of seven into two North Portland two-bedroom apartments, used to come over and call our home a “mansion.” Our home is built in 1977 and is a modest 2400 square foot house on the “Street of Reality,” as I used to call it when the “Street of Dreams” was built in the neighborhood next to ours. We are thankful for where we are but our home is not a mansion, especially not for the standards of the upper-middle class suburban community of West Linn which we have called home since 1989.

The question of how to build values into our children when you live in an area that is known for higher incomes, larger houses, and top-of-the-line everything; when kids get BMW’s for their 16th birthdays and new I-Phones every year; when taking the school bus and riding your bicycle as a teenager is not cool, and poverty is a 2-year-old car, figuratively speaking, of course.

I remember talking to our babysitter Tara’s dad when our first two kids were ages 3 and 2 and we were newer to this community. Tara’s dad said to us: “It’s hard in this community to keep your kids grounded in reality. We have chosen to live in a certain part of West Linn, on purpose and we haven’t given our daughter a car at age 16, on purpose, and you have to work at it, to keep your kids grounded.”

Grounded is a great word. Our older four children all drove my mom van when they were new drivers; it kept them grounded for sure. And humble, although now it is a bit of a joke with my twins in our family how the van is a “chick magnet” for my the boys.

I grew up in a German household where I had very few clothes and we were only allowed to take showers once a week to save on our water bill, and our house was often really cold because we were saving money on our heating bill, and my mom clipped coupons all the time and when the date was outdated on the coupon, she clipped the date off so she could still use the coupon and we rode our bicycles to the store individually when the limit on the gallon of milk or a dozen eggs was one per person, and we would stand in separate lines and pretend we didn’t know each other so we could each get the cheap milk or eggs or whatever the item was that had a limit on the number.

My parents have always been so frugal, and my husband will tell them to go out and buy a new car but they will not — they cannot. They grew up during the World War II in Germany and it is just not in them to be what they would call extravagant. We so appreciate that about my parents, how they save for us and are so generous to their grandkids. To this day, my folks still ride their bicycle or walk places to get groceries, in order to save on gas — and to help the environment, which is a totally subject altogether of course; and it keeps them in shape physically and gives them fresh air.

While my siblings and I were growing up, we didn’t have big Christmases, but that didn’t matter to me — I loved our German traditions around our candle-lit Christmas Tree. My parents invested money into experiences for us, traveling to their native Germany, which was a huge deal to me then and continues to be today.

I think much of it comes down to appreciating what you have, where it came from, the work it took to get it. Bottom line: not letting our children become entitled.

Some of the ways to do this is to not give our kids everything they want all the time; to make them work for what they get; to have them do chores around the house, so they see the value of work; and to get them out to serve in the community, both locally and beyond, something my friend Wendy has started doing with her first-grader. They started helping at a local shelter.

And, while Wendy’s daughter at first resisted helping at the local shelter, it only took one time and she loved it after that. It is helping Wendy keep her daughter grounded and humble.

What are ways you have kept your kids humble and grounded in the suburbs?