We were googling on my I-phone, searching for natural, wildlife areas when we stumbled upon this 3-Creeks Natural Area. You had me at “Rare White Oaks,” which made me think of my own City’s White Oak Savanna, which was preserved through the blood, sweat and toil of many people, led by West Linn activist Roberta Schwarz.

On this day of exploring the 3-Creeks area, we had done a bit of back-to-school shopping first, and then, because it was so hot, I told my kids that we would look for something not too strenuous and something close by for today’s Adventure Motivation for them included the fact that we were headed for an air-conditioned movie theater after this.

Break up the day, right?!

3-Creeks Natural area is located in Northern Clackamas County near the Clackamas Town Center of the Portland, Oregon metro area. I know, crazy right? If it were not for some awesome, forward-thinking activists the past several years, it would have been turned into an extended highway.

The address is: 6700 SE Harmony Road, Milwaukie, Oregon. At first, just getting here was a bit tricky for us as the directions offered by the Yelp website were incorrect — they led us to a point on 82nd Drive and Highway 213, so do not follow them. Instead, the best place to find the trail that leads to this area with rare white oaks is to park at the North Clackamas Aquatic Park, located at 7300 SE Harmony Road, in Milwaukie.

No sign greets visitors to the “3-Creek Natural Area,” as the North Clackamas Urban Watershed Council warns on its website; but the trail is not hard to find as it’s to the right (south side) of the Aquatic Center, where a general sign stands before the path.

The three creeks in the namesake of the 3-Creeks Natural Area are Mt. Scott Creek, Phillips Creek and Deer (Dean) Creek. 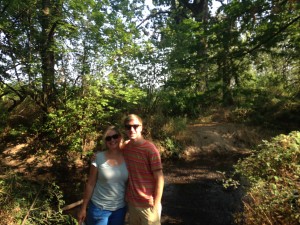 Within the 89 acres here you will find streams, wetlands, meadows, and the rare white oaks. Within the streams live cutthroat trout as well as small number of still returning Coho salmon and steelhead. On the banks of the stream there are said to be otter, deer, mink, coyote, weasel, beaver and a variety of bird species.

It’s an interesting location as it is sandwiched between commercial and industrial properties, railroad tracks, roads, two colleges, LaSalle High School, and private homes. The site contains a flood control facility, which stores water during the heavy rain season to protect the industry, businesses, railroad and homes.

Once in the natural area, we meandered on the trail that went to the left as it led under a canopy of trees. With the heat, it seemed the best choice. About a quarter of a mile or so, we found one of the creeks, which was beautiful and surrounded by dense trees, but no sign told us which creek it is. The industrial area that surrounded this natural area was evident by the noise we heard humming in the background.

After finding the one creek, we kept exploring, looking for the other two, as well as the meadows and wetlands which one of the websites had shown in pictures; but first we stumbled upon what looked like a small makeshift homeless camp with two sleeping bags, but no people. This freaked 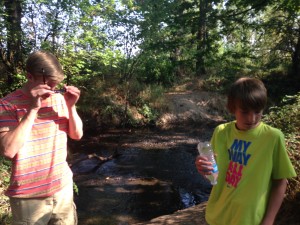 my kids out and is definitely something that that county has to work on. That, and the litter issue.

After changing directions, and making our way onto a different path toward the middle of the natural area, we found the

meadows and wetlands — and thankfully sound of industrial sound disappeared; instead we heard various birds and saw the white oak trees surrounding the meadows like a canvas.

I shared with my kids what I learned about the white oak tree — something I had learned while working on articles on West Linn’s White Oak Savannas: In Oregon, only three percent of the Willamette Valley’s original oak habitat remains. I read somewhere that some of these trees are 100 to 200– and up to 500 — years old.

This adventure was a bit different with us finding sleeping bags and litter scattered more than at other parks, but the history of the white oaks and the success story of people preserving the area made it quite interesting.

Also, of note, a documentary about this natural area being preserved was created and The Oregonian ran a story about it in 2012 Local Filmmakers advocate for 3-Creeks.

Note: For 6 months out of the year, 50 percent of 3-Creeks is under about three inches of water, so be forewarned during the rainy season.